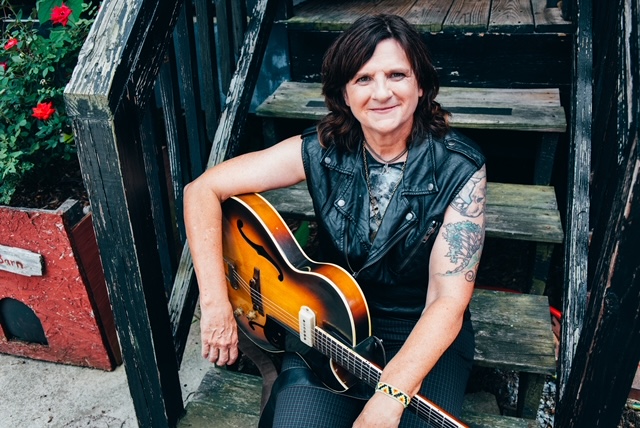 Amy will be doing a soft release for her solo tenth album,If It All Goes South, on September 16 followed by a vinyl release in late 2022/early 2023.  Amy has been fighting the good fight, as far as her lyrics and causes, over her career with the Indigo Girls, who’ll be receiving an Americana Music Lifetime Achievement Award this September in Nashville. The Amy Ray Band will be playing a CD release show in Atlanta supporting Amy’s longtime friend Brandi Carlile on Thursday, September 22 at the Fox Theater. Show details areHERE.

From songs about the death of a beloved dog (“Musacadine”) to celebrating the spirit of civil rights leaders (“Joy Train”), Amy continues to speak out about what matters to her. The first single on this new album is “A Mighty Thing.” The song, which captures the fervor of a tent revival meeting and features the propulsive banjo picking of Alison Brown, deals with how Jesus figures into the identity of gay Southerners raised surrounded by the Christian faith — “they taught me how to hate myself” Amy sings — but also explores the comfort offered by the “true gospel of love.”

“My band and I have been driving around in a van together for about nine years now, so at this point we’re like family,” she says. “We’re all so loyal to each other and to the project, and everybody’s doing it for the love of it. For us it’s about carrying your own amp, putting on your own show, and being proud at the end of the night that you were able to achieve something. None of us ever wants to get too comfortable—it’s always about the act of trying.”